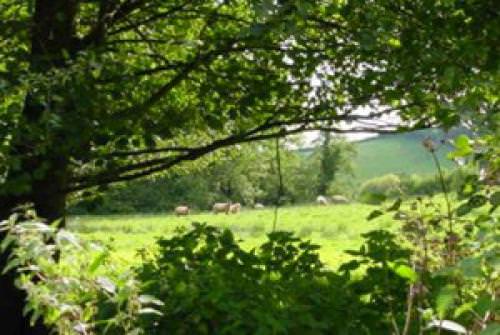 Huntsham Castle is an elevated hilltop site over 260m above sea level with stunning views (in excess of 20 miles) to the east, south and west- to the Blackmoor Hills, Quantock Hills, Dartmoor and Exmoor. The site is currently pastureland but in the past was probably a settlement as evidenced by the ancient (Iron Age) earthworks and fortifications. The present day fields of Castle Farm preserve a system of ancient hedgerows, one of which is a parish boundary that extends for over 400m through the farm. In the 17th century the castle was planted with trees, now veterans at over 300 years old and up to 100 feet tall. The land was formerly part of the neighbouring Highwood Farm and formed part of the massive Huntsham Estate administered by the Aclond family who also owned the Killerton Estate 15 miles to the south west. The settlement at Castle Farm was formerly a thatched workman's cottage tied to Highwood Farm. It burnt down in the 1900s and was rebuilt frm stone quarried around the castle itself. The current occupants have lived at Castle Farm for three generations.